Hi, my name is Slim Shady ! 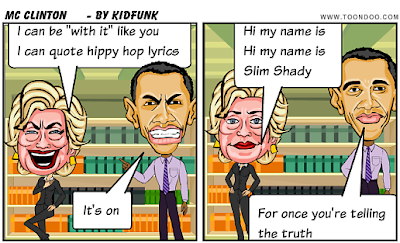 She going on her friends show today. Bill (I hate knee grows) Oreilly. Bill said that he always been a friend of the Clintons and been fair. Do you want this idiot to be President ? Hillary has taken money from Richard Mellon Scaife, the founder of the right wing conspiracy.He helped kick start Rush Limbaugh's T.V. show with his magazine called "The American Spectator". The magazine said that Hillary killed people , brought drugs into the country, the whole nine yards.Now Scaife got her back, so do Rupert Murdoch owner of Fox News and A-merry-ca.Bill Oreilly HATES her husband and personally attacks her family daily. Is she that DAMN DUMB.

Who got Sen.Obama's back , Keith Obermann, Rachel Maddow,Eugene Robinson, Black Radio and his supporters.The Billionaires and bigots versus the people, let's see who will win.
Posted by kid at 10:26 AM