It looks as if the right is trying to tell their people to behave. Many right wing sites are trying to distance themselves from the “wing nut” faction of their party. Don’t believe the hype they are as screwy as they ever was. They know that they are suffering an image problem. They lack message discipline. The Astroturf and ratfucking sites they made they are now throwing them under the bus. Well they had to do it. Many on the right were seeing how fake their grassroot organizations were. When your organizer of your tea parties is Dick Armey and your co-chair is Newt Gingrich people are more prone to call you out on your bull. The right even has people on the left doing their dirty work. On my sidebar is Black Agenda Report. They hate the President more than the teabaggers. They are fake militants. They claim that Obama is not Black or Socialist enough. They attack the real clubs and groups that are helping our community. Tom Joyner has probably sent more black kids to colleges with the exception of Bill Cosby and Oprah. So what did Black Agenda Report do ? Attack him for being cancelled in some cities.Yes a guy with a internet radio show that didn’t help get a President elected disses the top black radio personality that helped get a President elected. When black people are in trouble they don’t call the bitter black guy that worked as a writer for the Republicans, they call Tom Joyner. Trying to rehabilitate your fake civil rights group won’t work. When you are in agreement with 90% of what the right is doing then you are not a progressive.
Posted by kid at 9:59 PM No comments:

I wanna be your lover


I Wanna Be Your Lover [Video Version 1]. - Prince

If I can post this up it means he ended his embargo on playing his videos. It's about damn time.
Posted by kid at 10:07 AM No comments:

This is my second favorite song that he made.

Fox Sticking with Schedule Instead of Obama
Date: Tuesday, April 28, 2009, 1:32 am
By: The Associated Press


NEW YORK (AP) — The Fox network is sticking with its regular schedule over President Barack Obama this week.

It's the first time a broadcast network has refused Obama's request. This will be the third prime-time news conference in Obama's presidency. ABC, CBS and NBC are airing it.

This is getting crazy. This is downright childish.
Posted by kid at 2:19 PM 4 comments:

OK Sean, put up or shut up.

Sean Hannity has agreed to be waterboarded, and Keith Olbermann will raise $1000.00 for each second Klannity can take it for charity.I don't think Klannity can get out of this.Last time Sean got a pass. April 4th 2008 I saved Sean's life along with thousands of other people.Sean was invited to debate Rev. Al Sharpton .What was the subject Martin Luther King. Sean was going to take the anti-MLK position.You can't make this stuff up.The location...HARLEM.What did my dumb butt do ? Along with hundreds,maybe thousands of other people we had Sean disinvited.What was learned from this event ? That maybe Sean should have seen the LOVE the people of Harlem had for him.Well it looks like lightening is going to strike twice.Sean gets another chance to challenge fate.Sean thinks that waterboarding is a walk through the park.Will he take Keith up on his offer ?Christopher Hitchens AKA Wile E. Coyote went through this.He cracked. It put the fear of God into him , and he's a atheist.Now Psychologist say that drowning is one of man's most traumatic fear of dying.Sean won't get out of this using the Hawthorne Effect.That's being prepared for a situation you know that is about to happen. You can't prepare yourself for torture.Sean you played yourself.You're not going to cakewalk through this.
Posted by kid at 5:10 AM 3 comments:

A Day of Blogging for Justice

Lately in the united states there has been a rash of deaths from Police Taser. Some may ask why ? While I don't purpore to be a expert on these thing I can say one thing for sure, there are more minority deaths from tasers. Should there be more classes and procedures for the police ?All I know is that it has to stop. Hat Tip to AAPP.


The AfroSpear is calling on all bloggers to join us in a Day of Blogging for Justice: Standing Up Against the Police Pre-Trial Electrocution on Friday, April 24, 2009.

The rules are simple:

1. Share a post on your blog focused on your concerns about the tasering of Blacks folks.
2. Send an email to AfricanAmericanPoliticalPundit@gmail.com so that we may document everyone's participation.

He gives examples of what bloggers have been reporting on the police pre-trial electrocution:

* Electronic Village - Taser Policy Defined by 'Use of Force Continuum'

* Jack and Jill Politics - A Day of Blogging for Justice - Against Extra-Judicial ...

* The Super Spade - Tasered While Black

I like the villager, and so many other bloggers hope that you will participate. Please read villager's complete post on A Day of Blogging for Justice: Standing Up Against the Police Pre-Trial Electrocution

From African American Political Pundit
Posted by kid at 4:58 AM 1 comment:

Glenn Beck and FOX really want to Tea Bag President Obama good. As we know tomorrow is the first annual FOX inaugural race riot, or as Glenn Beck and all the Tea-Baggers call it A Tea Party. We are being told that it is impartial. We are told that Democrats and Republicans should unite against the bailouts. That’s strange, for the last eight years I was told to support the President in a time of war… no questions asked. Many minorities are going to be there. Many that are paid to say bad things about minorities. I hope they leave in time, that’s when the Klan and Aryan Nation will show up. Don’t take my word for it, just read their web site Stormfront. Some are being told straight out to recruit and cause violence. Some are being told to recruit and not say who they represent. I’m hoping that nothing will happen tomorrow. Some on the right are now even telling their breathen to not attend. We all know how disciplined the right is. Look at how people at Sarah Palin’s rallies screamed “kill him” and “terrorist”. They even brought their own cute stuffed plush monkey wearing their own nooses, how cute. Some are telling their audience that this rally is really about taxes and not about President Obama, yea right. One lie even has it that ACORN is going to start trouble. Let’s put the blame where it belongs, on the extreme right wing. Glenn Beck already helped inspired three murders in Pittsburgh. The murder’s family even said he was worried about being put into one of the President’s FEMA camps. Why they even said that he was going to take all the guns from everyone.

I have some ideas that will help to make tomorrow much more peaceful. First, go and take care of your taxes. Second, help someone out with theirs. Now if you must go to the Tea Party don’t get in the way of the FBI and Secret Service that will probably photograph and ID the marchers. Now if you represent a community activist group like the Southern Poverty Law Center or the NAAACP you’re OK.

In Cleveland where I live the kids are out for Easter vacation. Cleveland is a mostly black city. It is also a union city. There are a lot of pissed offed people on all sides. If the right wanted to be constructive they would do something to help people, not hurt them. These are just the right ingredients for a riot. When the Klan was here in 1999 there was three levels of security. They had a high fence surrounding them. It cost more than a million dollars.

Finally if any deaths occur send the bill for the damage to Rupert, Glenn, Greta, Oreilly, Hannity and the rest of the racist that want to cause a race war.
Posted by kid at 9:08 AM 7 comments: 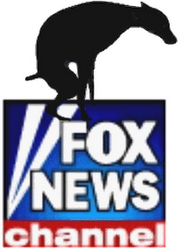 This is the LIAR that said that Cuyahoga County got it's name because of the crooked politics not the Native American name for the crooked river.This punk said he had information about voter fraud in Cleveland. I wonder why he didn't contact the FBI first ?Remember I changed nothing below, that is his real wiki info :

Bill Sammon is Fox News Washington Managing Editor and a Vice President for the network. He's the author of four New York Times bestsellers: At Any Cost: How Al Gore Tried to Steal the Election; Fighting Back: The War on Terrorism from Inside the White House; Misunderestimated: The President Battles Terrorism, Media Bias and the Bush Haters; and Strategery: How George W. Bush Is Defeating Terrorists, Outwitting Democrats, and Confounding the Mainstream Media. He is a frequent guest on shows like Special Report with Brit Hume, Fox News Sunday and Hannity & Colmes.

Sammon previously worked as White House correspondent for the Washington Times and the Washington Examiner before joining Fox News in August 2008.[1]

A graduate of Saint Ignatius High School in Cleveland, Ohio, and Miami University in Oxford, Ohio, Bill lives in Maryland with his wife Becky and their five children Brittany, Brooke, Ben, Billy and Blair.[2]

He is 6 feet 7 inches tall. His nickname used by some, including President Bush, is "Big Stretch".

On Februrary 27, 2009 Sammon was promoted to Vice President of Fox News, and Washington Managing Editor, a position once held by Brit Hume.
Posted by kid at 2:28 AM No comments: