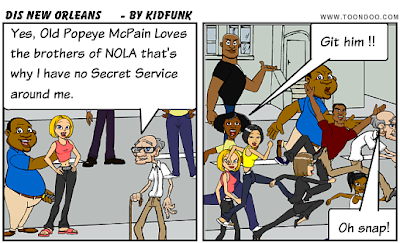 Yes Sen.Popeye McPain says he's finally getting Secret Service protection,yea right.You actually believe that photo op in New Orleans ? Remember when he said that baghdad is safe ? Sure its safe if you have a flack jacket and the 82nd airborne behind you,get real.Do you think you see President Bush within 500 miles of a black man with a red bowtie ? ABC News (Fox 2) wants you to believe that McPain is a man of the people.Who's going to let a white man worth $100 million dollars walk through the hood without security ? Hell the white people of New Orleans would kidnap him. If he didn't have Secret Service then he had a type of security detail.BTW the government is not releasing the exact date when he got Secret Service protection,I wonder why ?
Posted by kid at 12:56 AM

I took Japanese women. Impressed.
If you please link if you like.
http://vegetablesoupdiet.blogspot.com/
http://vuitton-miumiu.blogspot.com/