PEOPLE IN CLEVELAND ARE THAT WORRIED !
Posted by kid at 9:27 AM No comments:

2B N HARMONY LET'S SING THE SAME SONG,CAN WE ALL JUST GET ALONG?
Posted by kid at 8:55 AM 1 comment:


Is President Obama the anti-Christ? If he was(which he's isn't),Pat Robertson, David Manning, and Jack didn't know until after the election.Looks like the Holy Ghost when utilized by them ,can't pick the winner of a election.


These men and others like them are dangerous.This is where the Teabagger mindset comes from.Now I can speculate why these men are doing this, but I won't. Daily Kos don't subscribe to conspiracy theories.I'll just stick with reality.

Christians are taught to kill the devil.So if you call someone the actual Devil what should be done about them?When Ronald Reagan was President people didn't bring guns to where he had his townhall meetings.Even though there was eighteen letters in Ronald Reagan's name we didn't give him the analysis to see if he was the anti-Christ (6+6+6=18).Liberal broadcasters didn't punch at photos of him like a coward on Fox does.We didn't go to rallies and hold up signs threatening his childrens lives.I know ministers back then didn't pray each day for Ronnie to die unlike Alan Keys V.P. running mate.It's all about racism.

One day on Michael Medved's radio show Rev.J.D. Manning called the then Sen.Obama's mother a whore.Michael Medved said ,"I concur wholeheartedly".We seen how the right lie and use trick to stay in power. They are dangerous.

As you know Glenn Beck is planning a march on Washington . He said he's not hijacking Dr. King's memory in any way, shape, or form.Glenn you couldn't hijack it , you're not a man of peace like Dr. King was.So why can't it be on another day?Is this the same Glenn Beck that called Dr. Martin Luther King a racist?Damn Glenn how are you going to explain that to your female Tom ,Alvera King his Republican niece?We all know she's paid to kiss Republicians asses.

Beck says it's "divine providence" 8-28 rally is on same day as MLK speech, adds: "It's time we picked that dream back up".

Glenn Beck is a liar and his lies have led to violence and people dying.Remember Richard Poplawski ? He was the guy that killed three policemen in Pittsburgh because Glenn said that the President will take white peoples guns and throw them in a FEMA camp.None of this has come to pass.Glenn seems to be a good canididate for excommunication from the Church of Latter Day Saints.

By his example Glenn has destroyed the integrity of the church.The church wants to make progress with the black community after lifting the ban on blacks in the min 70's.


The purpose of excommunication is:

1. To aid the transgressors' repentance, thereby helping them receive the Savior's Atonement for personal sins . "Whosoever transgresseth against me, him shall ye judge according to the sins which he has committed; and if he confess his sins before thee and me, and repenteth in the sincerity of his heart, him shall ye forgive, and I will forgive him also.... And whosoever will not repent of his sins the same shall not be numbered among my people"
2. To identify unrepentant predators and hostile apostates and thereby protect innocent persons from harm they might inflict. "But if he repent not he shall not be numbered among my people, that he may not destroy my people" (3 Ne. 18:31).

3. To safeguard the integrity of the Church.

Four things could happen when Glenn has his hearing.

This is a very serious event for a mormon and I would urge Glenn to stop his foolish action or I will contact the church.

Martin Luther King is a man of peace...
Glenn Beck is not.


By kidfunk | View this Toon at ToonDoo | Create your own Toon

Glenn Beck wants to take a dump on "The Dream". 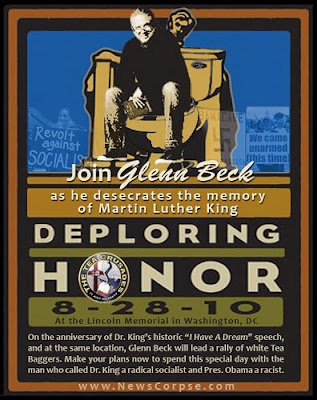 Marc Morial, President, National Urban League: "We're going to get together because we are not going to let Glenn Beck own the symbolism of Aug. 28th, 2010. Someone said to me, 'Maybe we shouldn't challenge him. Maybe we should just let him have it.' I was like, 'Brother, where have you been? Where is your courage? Where is your sense of outrage?' We need to collaborate and bring together all people of good will, not just Black people, on Aug. 28 to send a message that Glenn Beck's vision of America is not our vision of America."

By kidfunk | View this Toon at ToonDoo | Create your own Toon
Posted by kid at 4:26 PM 4 comments: