What's up with FOX? 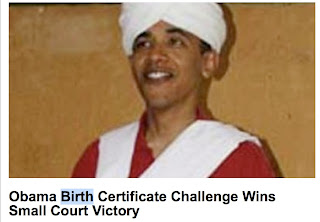 Where's is the President's birth certificate?

A soldier that won't serve his country unless the President gets his birth certificate?

What is going on here? Let's say you put a Hitler is Jewish sign up in a Jewish neighborhood. What will the people do?They will want to riot.That's the deal with the MLK sign is Atlanta.They want a riot!

Showing a hillbilly a photo of the President dressed in clothing not native to the United States, what is that suppose to do? Get him to kill him.Why that might start a riot.

For all you birthers I got something for you.He could not have been born in Kenya during the late 50's and early 60's because of a little event called the Mau-Mau rebellion.Whites were fleeing Kenya by the thousands when the uprising started. Blacks like Barack Hussein Obama Sr. couldn't stay their either. More blacks were murdered than whites.About 300,000 Kenyans were killed, maybe more. About more than 100 whites (colonist) were killed.The Army was mostly black, but the British could only own guns, it was the law.

If Barack was born in Kenya to a white mother ,during the Mau-Mau rebellion, then he is the Messiah.

Fox is being really sick. It gone past irresponsible.Why start a riot. To prove that President Obama can't handle the job.Then as a added bonus, blacks are killed rioting.Why put this shit on and on every day? What is the purpose?

First I want to say this isn't about the President, it's about the survival of our country. Some people would want it to go to hell than to have a black man succeed.Also,some people make money if America fails. When things are destroyed, they have to be rebuild.Well the only people that can rebuild after a riot are rich people.The way capitalism works is that someone profits from your misery.Guess who wants you to be miserable?
Posted by kid at 3:25 AM

Amen Kid, you told the truth there. How are you doing today? Have you and kathy been over to visit my blog lately? Or is granny getting a little too radical? (smile)

Kid
between Denmark Vesey beating his drum on the vaccines, and you beating yours on racist a** FOX news, I gonna pass out!

But seriously, did you every check out that link I gave you for Morris Dees on CSPAN speaking before the Press Club, and how he stated FOX is irresponsible in encourage hate groups!

What I dont understand is...why not use the Patriot Act against these groups, and have the FCC fine FOX, but I guess that would play into the rhetoric of fascist state intimidation!

I think I seem more radical, but you're getting there.

The stuff on the Salem Radio network and FOX radio is much worse.People are talking about overthrowing the Government.People are dying already.

Kid
That’s the point Dees is making that these groups are being sanction by FOX, and other media. If it was black media inciting violence against the government, and president. The FCC, Secret Service, and Justice Dept, would invoke the patriot act and shut them down!

FOX understands this and uses the rhetoric of fascist government action as a shield against any legal action, and this plays right into the paranoia of Turner Diaries type dogma that they preach.