Up the river without a kayak 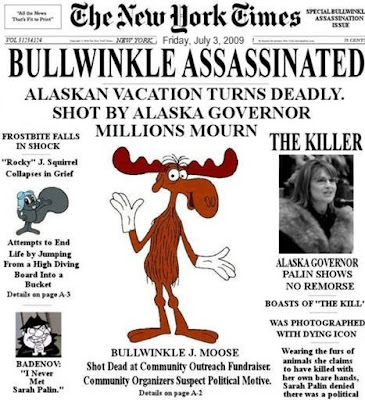 Instead of watching out for the "terry-risks" ,she should have been watching out for her PAC.Our plunky, spunky heroine Sarah is in deep doo-doo. Those gifts and money she accepted could get her in trouble.Many people in the Great White North think this is the reason why she quit.She should have went to school for law instead of journalism and modeling.

There's is a warehouse of gifts and money just for her. She said that since she didn't open them, it's not hers.Now when people get married and get gifts they say all the gifts are theirs, opened and not opened.

Will Sarah go to the pokey? Will she run for President? Will she get the terry-risks?
Tune in next week for another episode of "The Young and the Ridiculous".
Posted by kid at 12:33 AM

lol, that is good.

i read in a rag that she was also getting worried about the affair of the heart she was having with her husbands business partner. you betcha! or maybe she was in argentina with that governor from south carolina, boo hoo hoo.

didn't they build that house with all the stolen money or something?

All I know is that like "Citizen Kane" there's a warehouse full of gifts and checks and she can't accept until she leaves office. Government officials can't accept gifts.Then there's the problem with her PAC.Of course this is not being reported in the MSM.

Glad you could stop by!