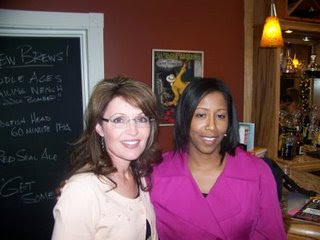 Afroturf-Using phoney "brothers and sisters" to give a white racist some "hood" credibility.

Yes Sarah Palin visited the Harriet Tubman library and she went to Juneteenth this year.Like Pryor did for Gene Wilder in "Silver Streak" Lil' Sis is trying to blacken Sarah up.This is her little friend Adrienne, she's there to "hook a sista' up".Adrienne been up in Alaska since January,. Someone is paying for her expenses. Alaska is a very expensive place to be.You seen commercials on television where the announcer always says,cost more in Alaska and Hawaii.So the right decided to Afroturf her. Surround her with knee-grows.This won't make the over 90% of us that voted for the President vote for her, it's not suppose to.It's to show those on the right that Sarah cares about black concerns.Well she didn't last year. Trying to get the then Senator Obama smoked saying he "palled around with terry-risk."

Why didn't Sarah go to Juneteenth last year? She was trying to get the bigot vote that's why.She was the only Alaskan Governor to not attend last year.So now we exist.What will happen when black is not in season ? Just a thought.

Here's a link to her cult...I mean blog.Tell me if she loves Sarah more than God, it sounds like it to me.BTW, she's the New York Chairperson for Palin 2012.

This is what Sarah is doing today:
Palin: Alaska tour is thanks, not goodbye
By MATTHEW DALY, Associated Press Writer

UNALAKLEET, Alaska – She was greeted like a rock star in Unalakleet, a fishing village on the Bering Sea. She danced with Eskimos in Kotzebue. And she watched grizzlies at a wildlife sanctuary on the Kenai Peninsula. In all, Sarah Palin has been on eight trips outside her Anchorage base since announcing her resignation two weeks ago. Is this a farewell tour, the start of a possible presidential campaign for 2012?

Palin insists it isn't, although she still won't say what plans she has after she steps down as Alaska governor on July 26, with 18 months left to her first term.

"I am Alaskan. I've grown up here and I'm going to remain in Alaska," she told The Associated Press in an interview. "It's not farewell, it's more like thanks for letting me be here and I'll see you soon."

No it's farewell, I'm off to run for President to get rid of the terry-risks.
Posted by kid at 1:03 AM

"Lil' Sis is trying to blacken Sarah up."

Sarah no more wants to be black than she wants to kiss Obama's feet. She's an idiot! No amount of smoozing with blacks is going to convince anyone that she is sincere in her efforts to be a "well rounded" individual.

More like "Motivation Money" I just can't figure that one out, she more weird than ab, who actually make sense every so often.

It's Me: If you were sincere you wouldn't keep posting at Nikki's racist site and yukking it up with her.You're only encouraging her.Tell Jefrine Bodine her routine is tired.

kathy:Yup Adrienne is doing it for the money.Alicia is too. She's a troll. Why do Flyinmy40's keep telling her how good her hair looks? She also insist that FOX is fair.She's one of those Alex Jones followers.Wo ai nee Kathy.

Sarah doesn't need any blackening up because she's perfect the way she is. You and I both know she's gonna be president when they toss 0-bama out next election.

Look here Chickenhawk of Chickenshit, she's David Duke in a dress.She might go to prison.She speak incoherently.She said dead fish don't swim,I think she got that quote from Einstein.she couldn't count to twenty if you told her to use her fingers and toes.She was a bad Governor of Exxon.She's stupid.she's not like Hillary.Hillary can count to more than five and know which shoe to put on which foot.

McCandy is a moron, or "moran" in white trash speak. She now has the dubious distinction of leaving office with 21 ethics violations filed against her and I feel confident they will keep-a-comin' long after she's gone and her office is fumigated.

Hey Chris , Long time no see. Glad you could make it.I seen that photo of the guy with the "moran" sign.