Some things speak for themselves 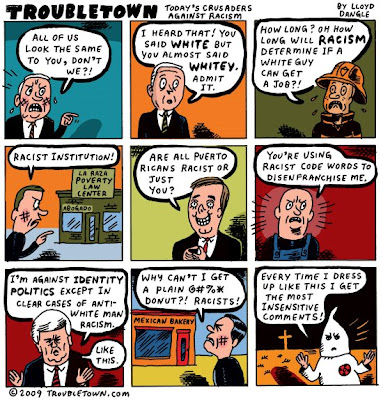 You nailed it with this cartoon. I love it. It's the truth and nothing but the truth.

I am so pissed about how they've tarnished Gates name and reputation behind a lie. Unbelievable! And some of them still want to say that it's Gates fault and ignore that Whalen and Crowley both are lying. That's America for you. Nothing has changed as far racist are concerned.

You know that they also used this to weaken Obama's political stance on the health care bill.

I'm with Granny on this one. It's the truth, the whole truth and nothing but the truth.

And I hate how people say Gates should have cooperated and nothing would have happened. When was the last time a white person was carded in their own home by the cops? That's what pissed me off.

First I'm not a big fan of Dr.Gates after what he did to Dr. Tony Martin. They use to call in Gates like they do Juan Williams to pull a brother down.One thing about Skip is that he's consistent, he doesn't change from how he acts.He never mentions race. He's the poster boy for post racial America.So when he goes off and says that something racial happened , it did.His immediate cousins are white, he doesn't see race.Just like when Oprah said the people in the Hermes' store were prejudice, they were.Oprah and Skip aren't militant.Now FOX is portraying him as Huey P.Newton, Chuck D, and "Catcher" Freeman (from the Boondocks cartoon) combined.

R.J.: I will update your web address on my blogroll.I haven't looked at the Barney video yet,I can't wait to see what up with that.

When the story came out and after I heard it, I was on the side of the professor. It would suck to end up being arrested in front of my home!
What Crowley did was stupid. Why should Pres. Obama apologize? Let's wait and see how this goes when Pres. Obama, Crowley, and Gates meet for a brew. Jobs and Health Care are more important. This is a distraction.