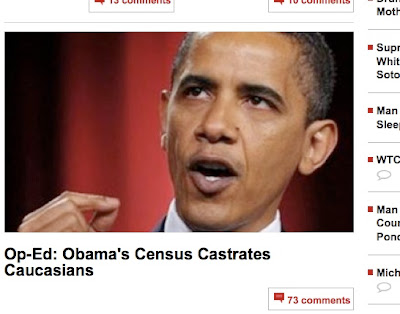 I got this from Newshounds.What's the worst thing you could say to a man ? That you are going to castrate him.

The so-called Op Ed has the kind of language you'd more likely find in a supermarket tabloid than the website of a cable news channel, especially one dedicated to "strengthening our diverse society by striving for unity."

Here's the kind of material Fox Nation puts forth in its efforts toward "strengthening our diverse society by striving for unity:"

Beside a graphic that reads, "Obama Census Bureau," is the text:

Its purpose is the legislative transformation of the United States of America into a land where conservatives, Christians, and Caucasians will become political castrados...


Farther down, it reads,

To assist in the hiring of census takers, the Obama Administration has opted to partner with... special interest groups (not one of which represents the despised race of whites who settled this country)...

The Obama budget serves to ensure that the United States will be broke.

His foreign policies will serve the cause of the Muslim world to the detriment of Israel.

And his census will make sure that the time of the Judeo-Christian standards and culture in the land of the free and the home of the brave will come to an end.
Posted by kid at 1:23 AM

that is some headline, what a disgrace!