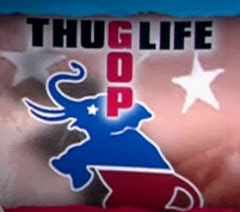 "South Carolina is too small for a republic and too large for an insane asylum" - James Louis Petigru, South Carolina native, 1860.


Be afraid, be very afraid. The Republiklans had their first Presidential Debate in South Carolina. After Bill Sammon was caught lying on tape about the POTUS being a Socialist, this Focus Group thinks he's a Socialist. Frank Dunce sorry I mean Frank Luntz conducted his "fair and balanced" polling with a group of bigots,... oops I mean voters. The President could give people health care, $3,800.00 for a new car and have Seal Team VI kill bin Laden and they would still hate him. Now no one's that prejudiced. It's not like they want to put the POTUS in jail for killing bin Laden, oh wait Judge Napolitano, Glenn Beck, and Mike Gallagher ALREADY want to do that.

Don't worry I have hope. Oil is going down and some of the elderly have been scared sh!tless by the Republicans plan for Medicare. They also energized the Unions.

Now the events of May 1 are great but we can't let the people forget why the country is in the shape it's in. Boehner wants to KEEP giving Oil companies billion dollar welfare checks. The only bills the Republicans have passed have been for taxing Abortions and defunding them. Not one job was created by them.

Let's keep reminding the people why they need to be thrown out.
Posted by kid at 11:16 PM

You got that WRONG, TFF.

If you want someone dead and the body not to be found, hire a Sicilian from New JOISEY!

BTW, the Navy Seals not only had the body, but they took pictures of it.

You're wrong on so many issues, it's pathetic.

No the moral is don't get a Texan mad. They will kill a dictator and spend $1 Trillion to do it. I read somewhere that Shrub won the Iraq War. Do our troops know?

President Fredo is a good son, but a bad Don. He'll fight a whole war just for his Pa.

If President Obama declares war on the United Kingdom to avenge his father, then we can talk.