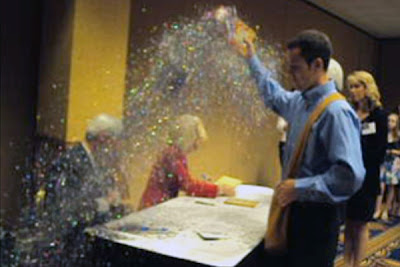 Newt should thank God that the person that threw that glitter on him was a Liberal. Conservatives throw lead and bombs, Liberals throw Cream Pies and glitter. What will happen next time? All this could be nipped in the bud if Fox and their minions would stop throwing out the violent cues. They didn't think this "let's get Obama" thing all the way. Maybe next time it might be some Hispanic protesters with their LEGAL guns expressing their Second Amendment rights at a Tancredo rally. Maybe it might be Black people at a Bachmann rally. Maybe it could be people at Greta van Susstern's church. So far using the "both sides do it argument" is moot. I don't have to put up Glenn's stats, or Oreilly's , or Goldberg's, or anyone on the right to prove my point. It would be nice if people can discuss their problems instead of trying to kill one another.
Posted by kid at 5:19 PM

I stopped by to return the favor after you left your thoughtful comment on the Swash Zone. It's my gain; you have a great blog! I've bookmarked ad I will return.

I think your observation regarding Fox's tacit promotion of violence is right on target.

yeah seeing how every political assassination or attempted was committed by a leftist keep spewing the treasonous commie progressive insurgent propaganda....no one is buying it ..or did you miss the 2010 historic REJECTION of liberalism?

Thanks again. I love coming to the Swash Zone, there are a lot of enlightened people there.

The people are not going to fall for the red baiting again. They now know that the Billionaires are trying to wipe out the Unions by screaming "Socialist", and thenn trying to link it to race. They are leaarning that the Koch Brothers and their friends want their pensions, collective barganing and control of America. They thought they could of turned America into a Plutocracy.

Wwe'll see next year how many Governors are Republican. They CAN'T RIG the votes IN ALL 50 STATES.

Obama's whore of a mother had Irish roots ? hmmmm who'da thunk it.

you commie fucks need to hurry up and riot.

"we the people" are getting impatient.

you commie fucks need to hurry up and riot.

"we the people" are getting impatient.

Florida 2000 and Ohio 2004. Now I can't really comment about Florida. I can speak about Ohio. The person that "spoiled" the votes was J.Kenneth Blackwell. when he left office he "grandfathered" a law in that he couldn't be prosecuted for it.

Hellpig is obviously in the throes of lunacy. The sewerage it leaves here is just one piece of evidence.

Whatever Hellpig is, it isn't healthy.

And it leaves a toxic, fetid odor here whenever it visits.

I know you leave stupid comments like HP's because you want people to see how sick they are, but this poor pig is irredeemable, I'm afraid.

Meanwhile, did you see the awesome videos of Mr. Obama in Ireland?

Hundreds of thousands of Irish men and women came out to welcome him.

It was an overwhelming show of respect and love for our president.

Kid, you're still the dumbest munt on the internet.

The only people dumb enough to be goaded into violence by others' mere words, are liberals and blacks, apparently.

You've said several times, that your fellow negroes will become violent, should anyone dare mock ObaMugabe in their presence.

I wonder how many thousands of people (children mostly) have been shot by your fellow negroes, due to their rap idols telling them they have to shoot anyone who doesn't 'respect' them.

You're a joke, and anyone who takes you seriously is a joke. I'm headed over to Sheria's to mock and humiliate them! Thanks for the link, dimwit!

Bacon can block your arteries. It's full of fat and will build up plaque to give you a heart attack.

It's best not to pay any attention to something so toxic.

Bacon is on a hate binge. And it's ugly and pradinic.

Go punch yourself in the face, idiot.

Your resident trolls continue to wallow in their own filth and, out of extreme frustration, grunt like hogs in heat.

Their swinish squeals will not relieve them of their delusions nor change the fact that Mr. Obama is their president and well liked by the American people.

The Marxist Usurper is not well-liked in this country. Every poll has him below 50 percent approval, and sinking.

He got ZERO bounce after the SEALs killed your here Osama.

But not making comments other than those that prop up Buckwheat's ego is a good fit for you.

And I don't suppose you morons noticed that the British secret service assigned the Pres**ent the codename "Chalaque", which is Punjabi for 'Smart Alec', did you?

Does Obama even know who his real father was?...we do know his mom was a Marxist whore who fucked Frank Davis on many occasions ...funny how Obama looks more like Davis then the father he claims....coincidence I think not.

And WTF is with Obama signing the Buckingham Palace sign in book and dating it 2008 What a fucking IDIOT ..still stuck in 2008 when people actually liked him ....awwww how fast they fall

Can you blame him, Hellpig?

It's been all downhill since then.

Looks like Michelle Obama's victory garden has produced quite an abundance!