Why did Breitbart FAIL at smearing Rep. Weiner? 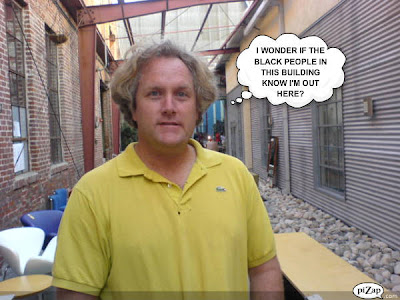 If you probably watch Fox , you probably heard about "Weinergate". Behind it is of course Andrew Breitbart, the King of Slime. Well Breitbart is 0 for 5. He lied about ACORN. He lied about Planned Parenthood. He lied about Shirley Sharrod. He lied about the NAACP and he lied about Congressman Weiner. It seems that the Congressman's yfrog account wasn't hacked into, he was punked by a punk. It's kind of technical but things like time codes and the speed which the screenshot was taken sound fishy. Well maybe Dan Wolfe could answer some questions.

Democrats really didn't care about this situation because first, his marriage is none of my business. Democrats don't have a litmus test like that only Republicans, just ask Former Congressman Chris Lee. We only care about what job someone does, not their sex life. Second, it was effin' Andrew Breitbart, a man that only job is to screw minorities. A man that looks like a cross between the Skipper from "Gilligan's Island" and Boxcar Willie. He looks like an amature junkie. He even looks incoherant in his interviews.

Mother Jones reported that his financial disclosure form indicates his wife, Virginia “Ginni” Thomas, received a $150,000 salary from the group Liberty Central in 2010 and less than $15,000 from an anti-health care reform lobbying firm she founded.

Liberty Central, which she helped found, supports the repeal of the the Patient Protection and Affordable Care Act.

Weiner had taunted Thomas via Twitter on Friday, but his criticisms where quickly overshadowed by the so-called “Weinergate” fiasco that broke out Sunday. The congressman had previously called on Thomas to recuse himself from cases involving health care reform because of his wife’s financial connections to groups dedicated to its repeal.

Yes folk Uncle Tom-Ass wife Hillbilly.. oops I mean Ginny is in a lot of fuckin' trouble. No one is above the law. Ole' Uncle Clarence is important to all the billionaires out there. It seems like a punk like Clarence only listen to rich white billionaires. Will Congressman Weiner go after Scalia's ass next? I hope so. They are suppose to work for ALL the people , not the rich.

People are hep to you Clarence. From crowning Bush Emperor by decree to the Citizen's United case, you prove your alligance to the rich. When they drag your wife's dead ass to jail I hope that you are next.
Posted by kid at 2:43 PM

And you're staying stupid, Hot Topics.

Don't you ever get tired of embarrassing yourself like this?

Charlie Rangel is one of the most notorious tax cheats in Congress. Timmy Turbo Tax can't pay his taxes, but he runs the Treasury. Then there's the Clintons' investment in Whitewater while representing the venture for Rose Law Firm. And then 'misplacing' the records for ten years before 'finding' them under a chair in...wait for it...Shrillary's office. Pot. Kettle. Black, etc.

Your picture is in the dictionary next to "Hypocrite".

Explain why Rep. Weinie won't call the cops (even though he said recently that hacking is a serious offense which should be prosecuted), and why he won't say the picture isn't of him?

You can't explain- because he's a liar. It's his junk, it's his picture, and they were sent from his accounts. Now, how on earth would he have regained control of hacked accounts within minutes, from anyone sophisticated enough to get in there? Is he, secretly, a highly-skilled coder? And if the one who scares you so badly (Breitbart) did it, why aren't you shrieking from the rooftops for him to be investigated and prosecuted?

Don't make me dig up the dumb shit you say whenever you think a Republican takes his dick out of his pants at the wrong time.

Why aren't you DEMANDING an investigation, if Breitbart did it?

You should be calling for the head of the Teabagging Fascist who framed Rep. Weinie for this, if you have an honest bone in your stupid, lazy welfare-mooching body.

Why aren't you demanding validation of one of your conspiracy theories, when the evidence is so easily acquired? Your party controls the government, and all its authorities- so why aren't you even remotely interested in finding out the truth?

Is it because you've already decided what the truth is?

Most of all don't forget strung out. When he was on Martin Bashir's show he looked like he was drooling. He also must be worried about the lawsuit. When he was interviewing the protesters at the function the Koch Brothers was having he was wearing shorts and on roller skates. He looked fucked up.

Just say Nigger and get it over with you coward. That IS what you want to say isn't it? Every fucking day you make your ass look stupid. Republicans suffer from Cognitive Dissonance. You're all little Sgt. Schultz's, you didn't see or know nothing. You don't believe what's on the President Birth Certificate. You SEEN on Television a Black and Gay Congressmen get cursed outand spat on. Yet Breitbart offers $100,000.00 to anyone who can prove it. David Duke did the same think about the Holocaust, he offered a award to someone who could prove it happened and how many people died.

You hate and despise minorities to be rational. You need to grow up.

When Glenn beck did his "March on Washington" it was to shit on Dr. King's memory and TO START A RACE WAR! Many groups and organizations contacted our communities to KEEP THE PEACE. Now he's trying to START A ACTUAL WAR IN ISRAEL. Behind the seens people are trying to stop him. He thinks that once the War of Armagegeddon starts Jesus will come back. thank God that the three things that the three major religious groups agree on is Glenn's LACK OF SANITY. THEY ALL HATE HIM.

BTW, you keep asking me to dance with you , sorry I'm straight. Thanks for the complement anyway.

MLK A GREAT REPUBLICAN KILLED BY A DEMOCRAT

Just say Nigger and get it over with you coward. That IS what you want to say isn't it?

Kid I think it's what you want. You keep playing the race card and the comments you get are what you set yourself up for.
I don't expect you to know this but Bacons' remarks to you are just to show you how stupid you appear when you carry on like some victim of society 24/7.
Wouldn't it be easier to move on or are you going to be an angry old man sitting on the front porch babbling to yourself like some mental patient about how unfair whitey was to you all your miserable life?

Link to the video of these Congresscritters being called names. Do it. Or shut the fuck up already, you lying sack of dogshit.

One more time- you lying sack of crap- why aren't you demanding an investigation of Rep. Weinie's weinie?

Here- let me help you by answering.

You don't want an investigation for the same reason nobody has ever come up with footage of the alleged name-calling of coongressmen who themselves were video recording the event:

Because you're a liar, and this furthers your lie.

Speaking of what people 'really want to say', I know what you want to say, because you say it five times in every post:

I only wish you'd man up, and try making your demands at the point of a gun. Like your rapper idols tell you to do.

But you won't because you're the type of pussy who blames whitey for your 4th grade reading and writing.