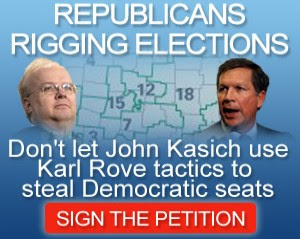 714,137 so far that's the amount of signatures that were collected to repeal SB 5, Governor Kasich Collective Bargaining stripping law. the deadline for the signatures is July 1st. All they needed was 231,000 and people are STILL signing the petition. This means that the bill will be on the ballot in November. There's a lot of things that Ohio don't have but one thing we do have is strong Union support.

Some people have wonder where are these idea for coming after the middle class coming from? Why is it that when a Republican Governor in one state promotes a cause, a Republican Governor in another state does the same thing. the name f the group is The American Legislative Exchange Council or ALEC for short. what they're trying to di is take public sector and turn them into private sector businesses. Why start up a new business when you can start up a business with an infrastructure already in place. when your buddy is the governor you can get a start up business for only pennies. A State Liquor business, a prison, schools, just get a Governor and the state legislature to ramrod your stuff through. Many Republican are members of ALEC. One prominent member is Governor John Kasich.

One plan that ALEC has is for the return for slavery, I kid you not. In Georgia laws are being prepared to stop undocumented workers from doing farm work. One idea have using people convicted of crimes to serve their sentence and get paid. It may sound logical to some but you have to charge the prisoners for food and lodging. There are also the court cost which means that THEY COULD ACTUALLY OWE MORE THAN THEY WORKED FOR. That's called Synergy. The Government makes money and the farmer makes money. Then there's the takeover of the prisons. In Ohio Kasich wants to have the guards reapply for work , but at a lower wage and less benefits. Do you want to know how you can stop them? I got something for you.

This will connect you to the anti-ALEC protest and petitions . We can't let them win.
Posted by kid at 2:32 PM

at least the republicans know haw to save money. All the democrats want to do is take from Peter to Kill Paul.
Are you paying attention? There is no money!!!! It doesn't grow on trees and you can take 0% of the top millionaires money and it still wouldn't come close.
Hey by the way Kid how do you feel about Nancy Pelosi's wealth increasing by 62% which makes her the richest person in the congress and she still gets all those middle class tax payer benefits that she imposes on the rest of us.
But hey according to you she has a "D" after her name so it's all good with you even though she could give 2 craps about you but just wants your vote.