Congradulations Herman, you are now a Tom! 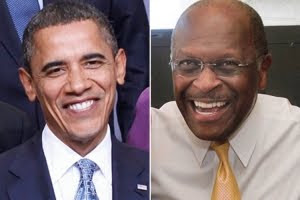 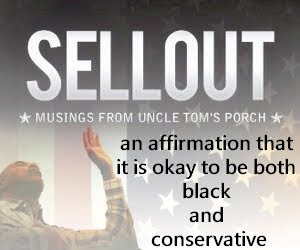 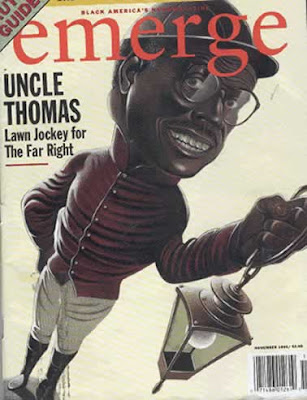 "'Barack Obama is more of an international', Cain said. “I think he’s out of the mainstream and always has been. Look, he was raised in Kenya, his mother was white from Kansas and her family had an influence on him, it’s true, but his dad was Kenyan, and when he was going to school he got a lot of fellowships, scholarships, he stayed in the academic environment for a long time. He spent most of his career as an intellectual.' Indonesia, Kenya, Whatever. I left unasked the question of whether it’s more disreputable to be Kenyan or to be an intellectual (and let us pity those suffering Kenyan intellectuals). But I suggested to Cain that while Obama had, in fact, spent four years of his youth abroad, it was in Indonesia, not Kenya. To which Cain, who has dallied with the fading phenomenon known as 'birtherism,' responded, 'Yeah, Indonesia.'"

I got this version of the Bloomberg interview from a Black Conservative blog, Booker Rising. Even Black Conservatives are upset with what Herman Cain said. It as if he has to renounce his Blackness to be accepted as a American. The ignorance he shows is stunning. The President grew up in Indonesia and WAS BORN in Hawaii. He only went to Kenya as a adult. If he has any bias to what the British did to Kenyans he shows none. They weren't exacatly Santa over there. During the Mau-Mau rebellion 150 Colonist died and anywhere from 30,000 to 300,000 Black Kenyans died. They tried to make their own guns but were unsuccessful, you see it was illegal for Blacks to own guns then. They fought with sticks, spears, and wooden guns. So if Kenyans are pissed with the British they have a damn good reason to be. Then Herman tries to say that the President isn't even a Black American because his family didn't have slave roots. His Great - Grandfather was a slave in Kenya. They even made him adopt the last name Johnson since they didn't care about African names.


Herman even the Black Republicans don't like you.
Posted by kid at 1:19 AM

Thank you for this post.. This is the best example I have ever read on this subject of why Low-Live Blacks hate hard working ones.
It just goes to show that a Black in this country is made to be a fool-like idiot unless he comforts with the rif-raff on the streets. Thank you, you really did a great job you are an inspiration to every free-loader and lazy bum in America.
Like I said, in your eyes a Black man with conservative values is called an "Uncle Tom" as they did to Clarence Thomas, If he doesn’t or won’t conform with the Rappers and the gangstas in da streets.. Anyone who stands for morals and principles is an inspiration. This is a prime example of the leftists not being able to hold to intellectual discussion without having to resort to insults. In your stupid and blind eyes Black folks got to blame Whitey for all the ill's Black people face, they still worship Jesse Jackson , Al Sharpton, and Louis Farakhan or Cynthia Mckinney because she stood up to Whitey as black leaders, rather than an educated Black man who is a Conservative. For that he’s called an Uncle Tom...How cool is that? . Better wake up black peeps,

What another stupid-ass post you wrote Pirate Boy.
You think that every one with conservative morals and ideas is a Uncle Tom? But you idealize every monkey in the street that knows how to break dance, and eat watermelon and fried chicken. How come you never bitch about the rich bitch Oprah Winfrey? Is she a Aunt Jemima, or is she cool because she’s one of the Obama bunch of monkeys. And is Denzel Washington a Uncle Tom because he’s a Republican
As I saw on another blog... “Give a white man $1 million and he'll spread it around and invest.....give a black man $1 million and he'll buy 20 cadilacs, a boat load of 40's, bling, bud, bitttccches an hoes and broke in 6months. Point being...you've been given trillions since the late 60's(civil rights act) but continue to regress into abject stupidity. 57% of Detriot(black) adults can't read or write, 21% of black high school girls in Memphis are pregnant. The fathers are NO GATTDAAmm where to be found, yet the black leaders do nothing to teach the young... but want MORE $$ just to "git us out". You tell me, would you continue to love someone who cares NOTHING about helping themselves ? What the fffccuckk is there to love ?”
Why do blacks think that the rappers are so cool and hate conservatives because they love the good thinks about America? How come all the gangsta’s get thrown in jail for carrying guns are black?

Do you even want to try to tell us that this post of your is not dripping with RACISM ? Because Herman Cain dares to want to have conservative values, he's ab Uncle Tom? Herman Cain is a self-made man who happens to be black, and who is not afraid of anyone, and not afraid to say anything about Obama and say it to Obama’s face Herman Cain did not steal anything he has, he worked hard for it.
Every time I hear these things I PUKE.

You really need to grow up son. All the sockpuppets in the world isn't going to help you. People know that you are fake. Did you read the damn article. IT'S BLACK CONSERVATIVES THAT ARE MAD AT HIM! So Mr. Schizopherenic what idenity are you going to pick today? A fireman, a policeman or a judge?

Now about Oprah she does give MONEY to the Black community. I don't think that Herman gave to anybody, especially Blacks!

Maybe you should have included what the black conservative blog said because I'm not reading any dislike or hate into that article from Bloomberg.

And how is he an "Uncle Tom"? Is it because you think he is degrading Kenya? That's quite a stretch, sir. Mr Cain is everything that is right about America. See, a black man can actually succeed, and until you point me to evidence to the contrary, I don't see him having to be any white man's pansy to become the man he has become.

Why are you so afraid of him? Because he doesn't dwell on the past and has worked successfully to overcome the stereotypes some people have about blacks? Maybe HE's the one that hasn't let Whitey keep him down?

President Kennedy had to reassure the Protestant and non-Catholic majority of the country that he was not going to let the Vatican tell him to run the country. I don't feel angry at him for saying that, nor do I think he was dishonoring the Church in any way.

I guess you didn't read the article then. If you can't tell something is racist, then YOU aare a racist. I put in the article the location to find the blogger.I wrote that the blogger got it from Bloomberg. I didn't put down what the author wrote. Black Conservatives are ANGRY AT CAIN. Maybe you think that a black person demeaning and degrading themselves is SOP, but we don't.


Also I think that ANYONE that endorces a site that promotes hate like Bare Naked Islam is a sick bigot. It is a hate site. A few days ago thay made jokes about disabled Arabs and thought is was funny that they DIED! I would be against the save for ANYONE.


If you can't se ALL the racism that people direct at me then YOU ARE A RACIST.

I had never heard about Bare Naked Islam before I started reading your site, so I can assure I have never been there.

That chip on your shoulder, er, attitude is WHY there can never be a reasonable discussion on race relations in this country, maybe not in my lifetime though I hope I'm wrong.

No, I don't see the racism in that post but I'm sorry you seem to be the kind of person to see racism and ulterior motives under every rock and around every corner.

Sounds like paranoia. Do you expect anyone to take you seriously at all when you think this way? Because I don't. And I know God bless you with a brain---put it to use and ask Him to let go of all the bitterness and anger you seem to hold onto with all of your might. It will only lead to bad things.

This backs up what you posted. You are NOT a racist, but a REALIST!

Your trolls are nothing more than rightwing hacks:

Read the first comment and tell me if you would say that to a African American's face?

I guess they couldn't read that it's Black Republicans that are angry at Herman. Every week a prominent Black Republican jumps ship. Some of the Black people that joined the Tea Party were so hurt by the treatment that their fellow Tea Baggers gave them that they went to the NAACP and reported what happened. They thought that they were spies. Herman is going to have to take 17 months of what the POTUS has been taking for years,FROM HIS OWN PARTY! When Herman and Col. West went to the CPAC convention, people ask them where to be seated. They're going to hear a lot more of that.

I don't even have to show up, and Kid Butt-Pirate is commenting to me.

WOW! Did you say that Oprah don't give money to the Black Community?

Check out this pile of crap..

The Somali Pirates said:
"Then Herman tries to say that the President isn't even a Black American because his family didn't have slave roots. His Great - Grandfather was a slave in Kenya. They even made him adopt the last name Johnson since they didn't care about African names.
Herman even the Black Republicans don't like you.

I didn't know there were negroes in Vancouver.

While Socialist Canada burns, loots and destroys, not an incident in (still somewhat) Capitalist America (Boston)

Herman Cain is an Uncle Tom and I'm Madame Queen. That's what a relative used to call me and I loved it.

Maybe I should have used that as my handle instead of Somerset South Carolina?

Herman Cain is an Uncle Tom

And I'm Priscilla Queen of the Desert

Congratulations, Kid, you are now a racist.

The Left loves to use the "Uncle tom" racial pejorative against blacks who did not fit their political stereotype of proper Black behavior, and NOT against actual "uncle Toms", submissive blacks.

The racism is quite clear on this. You'd not be using this insult if his skin were white.

This is just one of many many blog postings from the Left that I see bashing Cain primarily for his race.