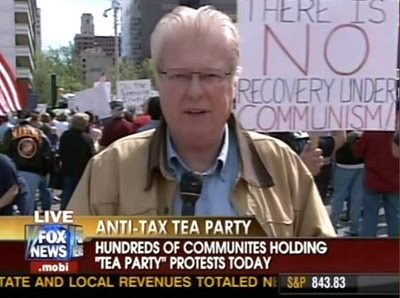 That was John Gibson in 2007. During a school shooting in Cleveland he made the comment. I knew the race of the shooter because FOX didn't say he was black the very first second.

He also made the famous quote from "Brokeback Mountain" after Heath Ledger died, "He didn't know how to quit us ".


The bigot even told white people to go out and make more white babies.
"Do your duty. Make more babies... half of the kids in this country under five years old are minorities.

Yes they took John Gibson off the air and put Glenn Beck in his place.But Gibson is STILL on radio.He went after Michael Jackson and rappers on his Friday broadcast.

He played audio on his show of Snoop Dog smoking marijuana as a tribute to Michael.I know if it was David Duke ,Gibson wouldn't have mind. He's using his hatred of hip-hop as a excuse to attack ALL BLACKS.Just group us all together and attack.

People forget that FOX has radio stations too.
Posted by kid at 2:21 AM

That's right Kid stay on top of Fox News because they are some dangerous people.

BTW, I finally figured out to put the pictures and videos on my blog. I'm still trying to think of some things to add to it. It might take me a good month because I'm busy through the day. Thank you and Kathy for all the help you both have given me.

Pretty soon I'll have my profile down and an e-mail address will be added.

These whites want to keep fucking with us until we really decide to snap (I hope). It's fucking sickening now. How long does shit have to go on before people reach their breaking point?
I'm sorry, but my damn tolerance level is too low for these white folks. I don't mean to sound like a rant but I'm pissed. People only do as much as you allow them to do to you. When are we gonna wake up?

Hey granny, don't add too many videos though. It'll slow your page loading down to near- molasses speeds, and it'll annoy alot of new viewers (who don't know you of course *wink*) and probably drive them away. People hate slow loading pages, and it can possibly crash someone's computer.

Hi Kid, John Gibson sounds like he knows all about what he doesn't know anything about. What an ass.

Hey Granny, glad to help, you know you can also cross post at the Daily Kos, and also, the Sanctuary also allow diarys too. I was going to post something there, but I never got around to finishing it. Maybe I will get time:))to do that.

You not gone believe what I did. I was writing about something else and accidently including it in that last post I wrote on the census. I discovered it just now, and corrected it.

Granny got to get use to this.

Don't Gibson resemble the Marshmallow Man in "Ghost Busters". He really let himself go.Keith Richards looks better than him.

You have a wonderful blog. could you fix up mine ?

Some days don't watch FOX, seriously.You'll feel better. Try reading newshounds.us.
You don't have to watch it and report, someone else will.BTW, they are trying to get people to act violent.They want to blame it on the President.

Thanks for helping Granny out.What is The Santuary ? I never heard of it .

I didn't mean it as a insult.People do get hyper when they watch FOX. I do it to see what lies they are putting out to the sheeple.Many people have their cable company take FOX off their television.

Many days my friends and family don't believe what I say about FOX.It's not that they doubt me it that they can't believe that anyone wasn't arrested yet.