I told one of my friends that I think Sugar, the author of this is actually Michelle Malkin. They think it's someone else.She was out of commission for a couple of months.I guess Rupert found some loose change laying around.She reminds me of the maid in The Omen that says, "Happy Birthday Damien" and hangs herself. anything to make Massa happy. 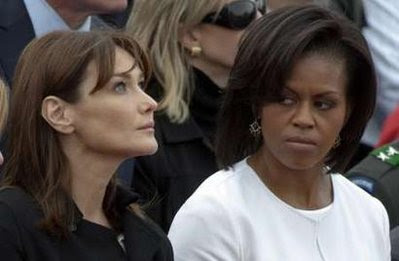 Sugar N Spice
All NObama, All the Time.

Now, this is some Grade A mean mugging. lmao Let me tell you what she was thinking, okay? "I don't know who this white bitch thinks she is." Hahahaha Michelle Obama is a psycho. --SUGAR

Funny, I thought the same thing when I saw the photo.
Remember the interview where she stated that she would have to think about whether or not she would support HRC if she had have won the primary. What struck me was her demeanor...mean like this photo.
Gracious..she is not.

Methinks when the Obamas are in Europe, it's not the Messiah who needs the food taster.

MG, they've been trying to paint her as this happy homemaker, but that's not who she is. She's a conniving, evil woman.

I posted that picture the other day, boy if looks could kill...

Imagine this: A few years from now, Obama has served 8 years, now Michelle wants to get into politics...like Hillary Clinton did. Can you imagine HER in office? The word witch comes to mind, only with a B rather than a W.

Debbie, I think Michelle Obama would make a great President, but she probably wouldn't want the job, she is smart, beautiful,educated, an all around great person, too good for the American public, especially asswipes like you.

Read Dr. and Mrs. Hamilton's blog.Lot's of good old fashion American racism.My next column is about these people .

thanks, Kid, I read some of their crap today, he is actually worse than her, except that ridiculous profile picture of hers, where did she find that?

If Debbie found out that Wonder Woman(Linda Carter) is Latino, she would change her avitar real fast.