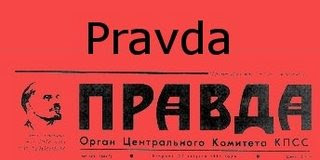 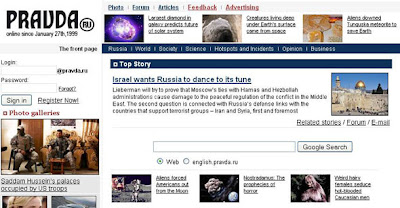 This is the Capitalist version of the newspaper. They're much like FOX. It's publishes sensationalist articles that have nothing to do with reality.If you are familiar with Sun-Tsu's "Art of War", you'll know that your enemy will not publish what they know about you.

Any publication that post busty photo's of semi-nude women should not be taken seriously.The on-line magazine put out anti-Obama articles , but only in English. The other editions of their magazine in other languages don't.This is for American consumption only.The country also publish a separate Russian edition,but it is separate from their on-line foreign editions.

When FOX's proles read what Beck and the other hate-monger write when they quote Pravda, they take it for the Gospel truth.So when you read the English version of the paper that says that the President is a Communist agent, please be assured that it is not real.Yes Pravda standards,(the REAL one) are higher than FOX's.So much for American journalism.
Posted by kid at 12:12 AM

The Right is reading Pravda? That whirring sound you hear is Ronald Reagan spinning in his own grave.

Today's Pravda looks a lot like the New York Post. The latest scoop they have in the front page is "Obama: USA's Mikhail Gorbachev." Also, "Ukrainian Girl Born Without Mouth," and "Russian Adult Star Gets Tattooes."

How dumb can they get.It's a strange world when the National Enquirer in now a legitimate news agency.

The scary part is that Glenn Beck's followers think, THAT IT'S REAL! they have nerve to call the left delusional.