I'm sorry .Palin not that bad a V.P. running mate. 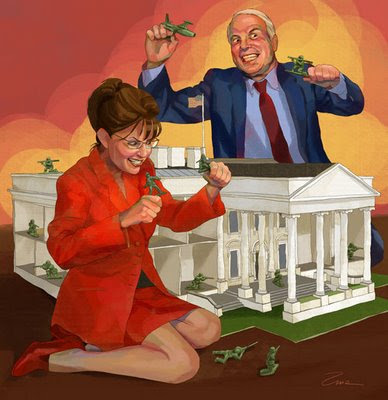 Sarah Palin made speeches where the crowd got whipped up into a fury of wanting to assassinate a sitting Senator.Now that's bad, but not as bad as another V.P. Alan Keyes V.P.Wiley Drake.He prays for THE DEATH OF THE PRESIDENT.Don't believe me, well look:


Later in the interview,Alan Colmes returned to Drake's answer to make sure he heard him right.
"Are you praying for his death?" Colmes asked.
"Yes," Drake replied.
"So you're praying for the death of the president of the United States?"
"Yes."

Colmes asked Drake if he was concerned that by saying that he might be placed on a Secret Service or FBI watch list, and if he believed it appropriate to talk or pray that way.

"I think it's appropriate to pray the Word of God," Drake said. "I'm not saying anything. What I am doing is repeating what God is saying, and if that puts me on somebody's list, then I'll just have to be on their list."

"You would like for the president of the United States to die?" Colmes asked once more.

"If he does not turn to God and does not turn his life around, I am asking God to enforce imprecatory prayers that are throughout the Scripture that would cause him death, that's correct."

People wonder where the right gets the idea to go out and kill people ? They pray to God about it.
Posted by kid at 4:20 AM

God is not speaking to him, nor did he give him that prayer. He is outright lying on God. More like the devil told him to say that. The enemy come to kill, steal, and destroy.