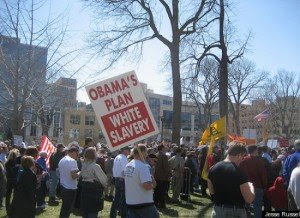 First a guy making threats and he has a book on his wife's site about fighting counter-terrorism IN the U.S. He better worry about the Treasury Department (Secret Service) visiting him and his family.Rich bigots are the most dangerous. A black person can't get Bill Oreilly fired, but Oreilly can get a black college professor fired for his politics.

So no matter how many degrees Dr.Boyce Watkins has or how many millions Oprah has we will still and always be considered NIGGERS !


I wasn't gonna say anything until Debbie commented, but here goes:

I also don't know how it is you know that I am rich as you stated in some moronic response to one of my wife's posts. Did you figure out a way to hack into my bank account or something?

I guarantee you that what we have today was earned through months and years of study and hard work. Nobody gave us a damned thing. We didn't sit around feeling sorry for ourselves waiting for some entitlement or gubment program to come to our rescue. I figure by listening to you that you're probably on one or two entitlement programs yourself which the rest of us hard working folks have to pay for. Of course, you're not thankful. You just bitch cause whitey has given you the shaft.

Sounds like you're just another left wing, hate filled sonofabitch who has got nothing better to do than spew your bullshit on other people's blogs.

And you probably voted for Obama for no reason other than he is black. That makes YOU the asshole racist. Barack sure doesn't have any other qualifications to hold the office of president.

I hope he turns out to be an utter failure. I agree with Rush Limbaugh. I want the president to fail. I couldn't care less what color he is, but I do care that he is driving this country to socialism and is spending money that my grandson has not even thought about earning yet.

Finally, I figure that you are one of the sorriest human beings I have heard from in a very long, and trust me, I have seen a whole bunch of sorry excuses for human beings in my time.

I wouldn't mind spending about 10 minutes alone with you in a room, cause I got the feeling that someone needs to take your inner child and kick its little ass.

And after that, I'd take my brand new confederate flag and stick it up your ass, just to shut you up, because that is the hole that you speak from about 99 percent of the time.

So there ys go ASSHOLE!

The Grouch at Right Truth

The deal with the confederate flag, your wife posted that on Ron Russell's site.

Now I don't know that you're rich, but if you're a doctor that makes less than Joe the Plunger, you're pathetic.

I didn't vote for the President because he's black. If it was like that I would have voted for J.Kenneth Blackwell for Governor instead of Ted Strickland.Yes I didn't want a racist as Governor of my state.

You went and cursed me out. That shows that you have no class.I guess money can't buy you class. BTW, you didn't earn your status. If you were black you wouldn't be a doctor AT ALL !Think about it.

I know it's killing you that you can't call me the N-word. I guess you have to make do with Socialist, Marxist, and Usurper.

After what happened today in DC at the Holocaust Museum, I wonder how many more nuts are out there. These are actions taken by an 88 year-old man!

White entitlement at its worst. What a maroon.

The right has already found a strawman to blame it on..Rev.Wright. I'm not kidding.It's already up on FOX. Beck has blamed the President, and G.Gordon Liddy has blamed Rev.Wright too.Soon it will be Martin Luther King's fault.

The majority of people are not paying those people any mind. Most are demanding that the hate crew be locked up and throw away the key, which might be in the making.

There might be some more nuts out there but the numbers are exaggerated.