Oh my God they killed Kenny, you bastard! 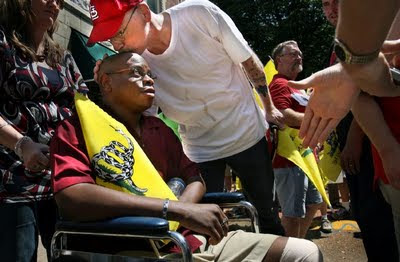 Kenneth Gladney-Call to Action!
by blacksnake

By now most of you have heard of Kenneth Gladney but for those who have not the St. Louis Activist Hub is following this story in a series of articles beginning at the URL below.

In reading over the articles in this series I came upon a very interesting series of comments by an anonymous author that I will post below.

I am curious as to what exactly "The Kenneth Gladney Fund" is. Is this a legal defense fund? A non-profit educational project? A political organization?

I believe that a non-profit organization such as an educational program or a legal defense fund must register in 39 of the 50 states in order to raise funds indiscrimitely online.

Additionally I would then assume that the filing requirements of the Missouri Revised Statutes would have been followed.--

A quick check on the Attorney General of Missouri's list shows no registered charity for Kenneth Gladney.

I did a little further reasearch and found that if this is an advocacy group such as a 527 group the group would be required to report donor information, such as occupation, for donations over $200.00. But the Paypal DONATE link given simply allows you to donate any amount without the need for such information.

I also checked for a charity named Project Libery, but found none.

What can we do?

So...Let's get down to business
I don't got no time to play around, what is this?
Must be a circus in town, let's shut the sh*t down
on these clowns; can I get a witness?

Eminem-Business
Posted by kid at 4:08 AM

Wow. Maybe the fundraising is actually a scam. Good gracious me. Oh my.

Here's some advice. Don't give any money.

More advice. Create you own site that identifies the fundraising as a scam.

How about your happy punk ass stop fucking with people bitch.

kid, you need to understand that when you are on the Internet and you write:

"How about your happy punk ass stop fucking with people bitch."

Only bitches like you attack old ladies no slappz.SUCK MY DICK! is that stereotyped enough for your ass.

"Only bitches like you attack old ladies no slappz."

Attack? Attack an old lady? I see on top of fitting the stereotype, you're a moron too.

You're so confused by words that you do not know the definition of "disagree".

By the way, granny is a racist. I have no idea if granny is a woman. Old, young, black or anything else. But I do know what granny has written and granny is deeply anti-white.

If granny were in command of some facts, that would be one thing. But granny is one of millions of people who exist in an alternate reality the ignores facts whenever possible.

"SUCK MY DICK! is that stereotyped enough for your ass."

Wow. Yeah. You have what it takes to convince people you are a dope.

You can believe what you want to believe, I really could care less. You don't know me or nothing about me. As for your false assumptions concerning me, if you only knew. Nonetheless, you like to go around accusing folks and making negative comments about their character because, evidently you get off like that. Seeing how you do it on every blog you go too. Even they have to beg your pardon and think you are a twisted in the head clown.

Folks see through you. I guess, that's why a there are some blogs that you wore out your welcome on. You are really a piece of work.

BTW, some of the folks that you called yourself belittling are WHITE! That's what we're laughing at about you. BTW, I've been in the blogsphere for a long time. There are some people who know me personally, but I won't tell. I'll just let you keep making an azz of yourself because it is entertaining at times.

Well, tootaloo, I must go now. BTW, you not fit to kiss Kid's toenail and that says alot of about you.

BTW, sorry about all the error caused by typing that out so fast, but I'm sort of in a hurry. Nonetheless, that ought to give your miserable azz something to do teach or is financier. You are so fake!