If he was born in Kenya during the Mau-Mau rebellion , then he is the Messiah. 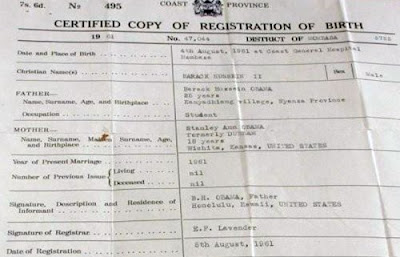 Dr. Orly Tatiz said this is his original Birth Certificate.


The President could not have been born in Kenya during the Mau-Mau rebellion.The tribe that was fighting the British the Kikuyu, had a lower child mortality rate that the Luo. Barack Obama Sr. was a Luo.Not too many black men would have brought their white wife to a country where there was a war going on.Black people could not own a gun in Kenya, it was illegal.About 100 "colonist" died and anywhere from 50,000 to 300,000 Africans died.This is from wiki:

A major source of atrocities was the 'screening' of Kikuyu and others suspected of Mau Mau sympathies. Elkins writes that, "Bottles (often broken), gun barrels, knives, snakes, vermin and hot eggs were thrust up men's rectums and women's vaginas. The screening teams whipped, shot, burned and mutilated Mau Mau suspects, ostensibly to gather intelligence for military operations and as court evidence."[19] A British officer, describing his exasperation about uncooperative Mau Mau suspects during an interrogation, explained that,

I stuck my revolver right in his grinning mouth and I said something, I don’t remember what, and I pulled the trigger. His brains went all over the side of the police station. The other two Mickeys [Mau Mau] were standing there looking blank. I said to them that if they didn’t tell me where to find the rest of the gang I’d kill them too. They didn’t say a word so I shot them both. One wasn’t dead so I shot him in the ear. When the sub-inspector drove up, I told him that the Mickeys tried to escape. He didn’t believe me but all he said was 'bury them and see the wall is cleared up.'[20]

Many settlers took an active role in the torture of Mau Mau suspects, running their own screening teams and assisting British security forces during interrogation. One settler helping the Kenya Police Reserve's Special Branch described one interrogation which he assisted: "By the time I cut his balls off he had no ears, and his eyeball, the right one, I think, was hanging out of its socket. Too bad, he died before we got much out of him.[21]

This is from Old Redneck from Daily Kos:

2. The document is dated 5 August 1964 -- a Saturday. From what I can find, Kenyan guvmint offices close early on Friday and are closed on Saturdays. Oooops.

4. Check out the name on the certificate, Signature of Registrar: E. F. Lavender. E. F. Lavender is a common soap in Kenya. Heh, heh.

5. This piece of paper certainly looks nice and new to be 45 years old -- unless the Kenyans were using acid-free paper back in 1964. Heh, heh.

6. Finally, Officials of Coast Province General Hospital reported: “We do not have computerized records going back to the 1960’s and can only sort through our archives by hand,” Dr. Christopher Mwanga, an administrator at the Mombasa hospital tells GLOBE. “We have searched for all the names of babies born on Aug. 4, 1961, and have not found the name of Barack Hussein Obama. That is all I can tell you.”

If you were black would you have your kid in Kenya during the Mau-Mau rebellion?I guess Dr. Oily Tits is wrong.
Posted by kid at 6:23 PM

Thats funny, they really need to give the citizenship issue a rest!

It's funny to me because the more they bring it up the more they're turning folks against them. People are looking at them like they are crazy. The only ones going along with them are those that were racist from the get go and still are.

Dang, but just think, they went as far as to get a phony birth certificate to prove a genuine one wrong. That's desperate!

They'll probably say that the President faked this one.You know how much they are lowlifes.

Kenyan or American? depends on how you look at it. If you are afrikan it's the reality of the blood flowing through his veins that counts, if you are anything else, well its the accident of birthplace, or perhaps a piece of paper...?!