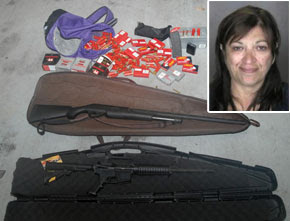 Glenn Beck Fan, Highly Armed, Busted For Casing National Guard Base, Thinking It Was A "FEMA Camp" Hotlist
by booksnmore4you

Chock it up as another instance in the growing list of crazies spurred to craziness by Right-Wing media crazies.


As reported by Saturday's NY Post, "a Long Island mother of three -- armed to the teeth with an assault rifle and shotgun -- was arrested for scouting out and taking pictures of an Air National Guard base."

Her arsenal included an XM-15 assault rifle, a shotgun and 500 rounds of ammunition.

The woman, Nancy Genovese, had been seen at the base a few weeks earlier, taking photos and questioning the guards. This time she had returned to take photos of the perimeter of the base. It's not difficult to make the connection that she was paranoid about "FEMA Camps".

Gee, what's she going to hunt with five hundred rounds? This is why the NRA needs to be cut off at the knees.

"Why does she hate the troops?"

I guess it's ok to kill the troops if you're repub.

The NRA is not the problem, the fanatics that join the NRA are the problem. Spurred on by irresponible media types like Glenn Beck, and Lou Dobbs, Pat Buchcann!

Never back away from a challenge, we need to be discreetly armed for the worst!