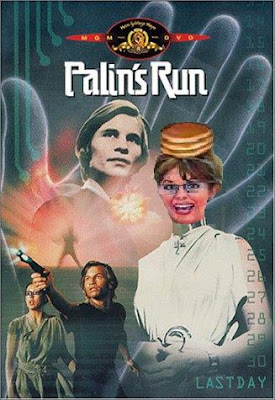 The America I know and love is not one in which my parents or my baby with Down Syndrome will have to stand in front of Obama's "death panel" so his bureaucrats can decide, based on a subjective judgment of their "level of productivity in society," whether they are worthy of health care. Such a system is downright evil.

Just when I think the right wing can't get any lower, they reach a whole new depth. When I heard Palin's nonsense the other day, I was like, "just go away already". In case you haven't seen it, The Young Turks did an excellent breakdown of Palin's foolish comments:

Thanks Malcolm I will look for it,if my President will let me. Do you know they are telling people to bring their guns to the townhalls. Some of them are in health facilities which means that it would be illegal.

Hey, Kid, I really think Palin is some kind of Grand Witch of the KKK.

the pill box hat is funny. Like Malcolm, i wish she would just go away.

She has done a lot of damage with her rhetoric and she is the reason why the GOP lost. Also, like Malcolm, I wish she would go away already. I will go on and say that her trump speeches brought more fuel to the fire, bringing in these hecklers to these town hall meetings.