Now Sean Hannity is trying to get a white woman lynched. 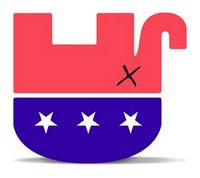 All American and true patriot Sean Hannity has a message for the tea baggers of Boston,to go and interrupt Jeannine Garafalo comedy show.She said that the tea baggers were racists that hated President Obama.Don't she know that she can't go around and tell the truth like that.I know Jeanine's audience and I know Sean's audience.These brownshirt tea baggers want a fight.They looked pretty dumb after their race riot didn't materialize.Some are even saying that they should boycott the show she's on FOX "24".OK fellas, go the hell ahead.Boycott FOX. While you're at it tell Michael Douglas and Oliver Stone not to make Wall Street II.Tell your Christian crowd not to watch the Simpsons and Family Guy (BTW, Family Guy was one Dr. Boyce Watkins favorite shows).Tell your mob to stop watching "American Idol" while you're at it.

Sean you and your audience have "jumped the shark". You ran out of ideas. You stopped thinking. People will soon see that you and your fascist are dumb.Some of your wingnuts are so dumb that they want to go after Jamie Foxx for wanting to do a concert in Aruba to help the economy.If Greta hates Aruba , well then FOX hates Aruba.Taking your anger out on the Aruban people is dumb. A great man was killed in Memphis but people still go there. A great man was killed in Dallas , but people still go there.Why Greta even in Natalie Holloway's state of Alabama 4 little kids died in a bombing in a church, but people still go there.Your mob violence already got three policemen killed in Pittsburgh thanks to Glenn Beck.How many more people need to die.
Posted by kid at 10:26 PM

Granny watched Cadillac Records the other day, well, part of it, I didn't get to see the rest of it. Reminds me of back in the days when the only thing black folks had to take their mind off of what was going on around then was music.

My God you people are crazy!