It's getting kind of real 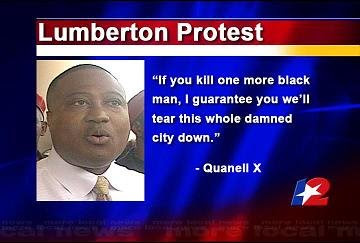 I got this from African American Political Pundit. You hear of tea parties and people angry at the President. They called him terrorist , communist, and everything under the sun.Some people just let it go off of them like water on a ducks back.Some have real good memories.Some remember the police brutality that happened in Lumberton, Texas.The contrived anger that Glenn Beck , Rush Limbaugh, and company have can't compare to the real anger of people seeing injustice on a daily basis.Some people aren't upset about paying more tax on $250.000.00 .There are several more people like these gentlemen in the New Black Panther Party.Maybe a Hispanic group somewhere. Maybe a group of gays . Maybe some feminist somewhere.I know one thing for certain,if everybody don't chill the hell out we're in for one hell of a summer.
Posted by kid at 10:21 PM

Well, we need to be prepared for the worst. The problem is FOX has these paranoid white folks armed to the teeth, the consensus of gun dealers is that there is a shortage of ammo...

Something disturbing is going on. The head of the John Birch Society is getting an interview on a local talk station and the downtown Holiday Inn Civic Center is hosting their dinner this coming Monday. I know this is not from FOX, but somehow FOX has influenced more media to air more extremists. What is their mantra? "Get the U.S. out of the U.N. and the U.N. out of the U.S." What? Are you kidding me? Who joins something like that? Some angry right-wing white people, although Klansmen are not allowed to join. But, how can they find out?