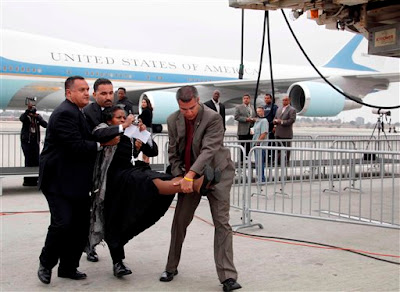 Nothing has changed for Blacks, especially women. I do not believe that a White, clergy with a collar would have been asked to leave the press area simple because he had a letter in his hand. I think the events were three folded. It was an opportunity for the Catholic Church and the gays to discredit me, and it cast President Obama in negative light for a Black female to be mishandled to this extent.
The staff person acted improperly and everyone knew it, but no one would stop him. It was an abuse of power.

This is Priest B.Lee of the Roman Catholic Church.The Priest tried to hand President Obama a letter. The pesky Secret Service tried to stop the Minister and reporter.I wonder why ?Well for starters there are no female Priest in the Roman Catholic Church.Nuns yes, Priest no.She wanted to hand the President a letter,what if it was anthrax ?Well Brenda this is the one time that the I'm Black excuse won't work.I read one statics that 10% of our Presidents are assassinated, that's 4 our of 44.

When I think about what she done I think of the Malcolm X movie.The first time his assassins did a dry run.Some one from the right could have paid her to see how close she can get to him.Was this a dry run ? I not a conspiracy nut but this looks messed up.Actually the Secret Service could have physically and painfully stop her. Yes they could have smoked her butt.Remember Malcolm was murdered by blacks and Martin Luther King's first assassination attempt was done by a black woman.The doctor that worked on Dr.King's stab wound said that if he sneezed or it was a few inches closer he would have died.

I know it seems like Prince or Brad Pitt's wife have better protection, well don't worry. The stars and the President have a crackpot list.Even though Priestess Brenda had press credential, they were prepared for her arrival.

Remember when Bill Oreilly got shoved when he tried to just walk up to the then Senator Obama ?They don't play that stuff anymore.People remember when the autograph hound walked right up to Obama when he was campaigning in Philly.People were outraged.Those guys knew the threat level he presented.If they have to carry you away Brenda then you are a crackpot.We see how other journalist can walk right up to the President and shake his hand .These people are screened. Katie Couric, Brian Williams, they all are screened.They grabbed Oreilly.

So when they make that check list for crackpots screen for Catholics and Blacks. There's no telling what Alan Keyes will do.
Posted by kid at 6:16 PM

Nice contents
i invite you to visit my blog
TV Window best wishes :)

Catholic Priest? That was the first clue!

What was so important in that letter that she could not give it to his aides like she was asked is what had me wondering about her. Nevertheless, people have to understand too many threats have been made towards our President from too many crazy folks to let anyone get too close up on him without being screened, regardless, and that's the bottom line.