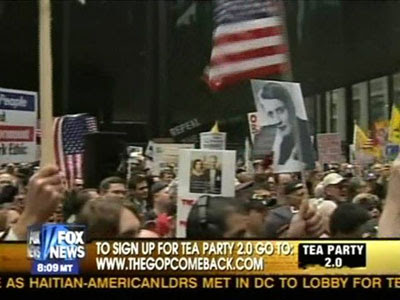 SANFORD: Let me give a disclaimer up front, which is it won't be as good as the first round of tea parties, but I suspect there will be a Tea Party 2.0, and 3.0, and 4.0, and 5.0, and go down the list because what I saw at the original tea party was a level of political energy that I've not seen in the last 15 years that I've been involved in the political process. And I think it's important that that energy gets harnessed toward creating change for the conservative side. I think that there is a genuine blowback across this country in reaction to what much of Obama and the administration and the Congress has laid out and I think that whether it's in this 2.0 version that we're gonna have or some other version, there's gonna be a movement that's created. And our 2.0 version, to give you a long sentence made a little bit shorter is simply via the Internet, inviting about 50,000 people to join us and having a conversation.

Now every time there's a damn holiday or event their going to keep bringing this stuff up.The website is www.thegopcomback.com. It strangly looks like Obama's election site.
Posted by kid at 5:34 PM