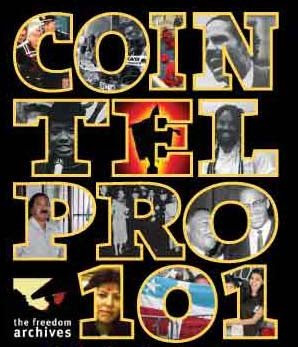 COINTELPRO was started in the late 50's and actually didn't end. Leftist students in the early 70's in Media, Pennsylvania discovered files on the governments program to attack groups on the left. You have remnants of the same culture that existed in the 60's going after Liberals today. The American Indian Movement today is being attacked because they're not going to "give" Uncle Sam access to their land and mineral rights. You also have Conservative media that does the same thing as the FBI did in the 60's with misinformation and propaganda. News of The World was caught in England and will close Sunday but that's not enough. When people like Rupert, Beck, Oreilly, Bolling, and others are shown for what they are, people will wake up and start to think for themselves.
Posted by kid at 11:51 PM

that's because Liberals have a rep for being sneaky and manipulative and doing things behind "closed doors" and have proven not to be trusted.

I guess Ted Kennedy got set up for murder?

The Mafia was connected to the Labor Unions. Those are the left's thugs not the rights.
They were born out of Chicago just like the rest of the corrupt Democrats there.

Who do you think was behind the shooting of MLK Jr.?

"On October 10, 1963, U.S. Attorney General Robert F. Kennedy committed what is widely viewed as one of the most ignominious acts in modern American history: he authorized the Federal Bureau of Investigation to begin wiretapping the telephones of the Reverend Martin Luther King Jr. Kennedy believed that one of King's closest advisers was a top-level member of the American Communist Party, and that King had repeatedly misled Administration officials about his ongoing close ties with the man."

A year after the WH proclaimed “recovery summer,: and two years after a trillion dollar “stimulus” program, the President blamed a series of “headwinds” for what he described as a “rocky” “recovery.” Obama said Greece, natural disasters, high gas prices, state budget cuts and uncertainty about the debt ceiling were prohibiting the economy from creating more jobs, which critics called just more finger-pointing from the White House. “Streamlining the patent process” and new infrastructure spending were a few solutions to the jobs crisis offered by the President this morning, leaving many economists scratching their heads. Looking detached, Mr. Obama plodded back into the White House with his head down, without acknowledging any responsibility for the economy for the struggling economy and appearing to some critics extremely out of touch.