Why we never ever bring up Hitler, never 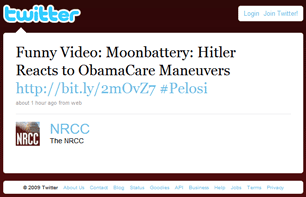 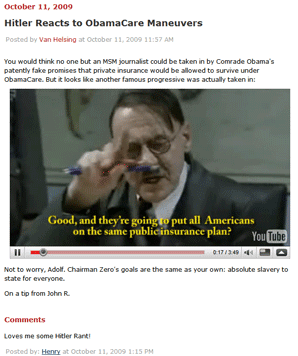 Jed Lewison of Daily Kos got this from the National Republican Congressional Committee Twitter feed:

The page they link to features a depiction of Adolf Hitler (who they call "a famous progressive", furious that "ObamaCare" will allow people to remain with private insurance plans if they so choose. And the punchline that the GOP's congressional wing finds so funny?

"Not to worry, Adolf. Chairman Zero's goals are the same as your own: absolute slavery to state for everyone."

Yes the right is calling the President a Fascist/Socialist.Funny in the real world both do not go together. Then the right always says that they would never bring up Hitler, well there's photographic proof.Did I say that this is from the National Republican Congressional Committee's twitter?

BTW, a very strange thing happened, the page mysteriously disappeared.As we know there is no proof that the Republicans put out the Obama is Hitler meme, right?
Posted by kid at 10:50 AM