Rupert Murdoch fires employee for defending cop killers and racist, and it's not Glenn Beck 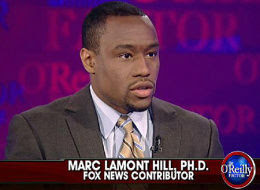 I can't believe it myself.The only real Liberal they had left that had any credibility, they fired.The worst thing about this was that Rupert Murdoch announced his firing himself.You don't see the President of NBC announcing the firing of a employee at a meeting in public.

First I have to say that Dr.Hill is a real Liberal.For some strange reason , he would work with the racist at FOX.I wrote his blog several times and told him to leave. There was no way to justify working there.It would be equivalent to me working at the Ku Klux Klan cookie company, I might not work in the lynching division but it's still the Klan.

They supposedly fired him for his support of Joanne Chessimard a.k.a Assata Shakur.They call her a cop killer.They also said that Dr.Hill supported racist like Rev.Jeremiah Wright.

Dr. Hill first things first,call Keith Olbermann up and see if MSNBC will give you a audition. After that write a expose' on FOX.

Next you could give Rupert some help.If he want's to start firing people that supports cop killers and racist he should fire his whole journalism department.Let's see Glenn Beck's record is three policemen killed in Pittsburgh and a census taker in Kentucky.Michelle Malkin got death threats directed to a child that had brain surgery and a school teacher for teaching Philadelphia kids a song about the President. Greta Van Susstern got the old and new minister of Trinity United Church in Chicago death threats.The new minister Otis Moss III father worked with Martin Luther King Jr. and was his best friend.Imagine him seeing his son go through what his best friend went through.

You may ask yourself why is the media (MSM) so quiet about this?People are worried about getting fired.When minorities do something we do it big time. Remember the March on Washington? How about the Million Man March?Then you had Jena 6 and Katrina.Then you can't forget when a few years ago our Hispanic brothers shut down a lot of places by not going to work for one day.Those voices that organized and promoted those causes are surprisingly quiet.You might hear a little protest but not like in those other cases.The so-called MSM is basically controlled by the right.Don't believe me just ask Sean Hannity, he had George Stephanopoulis ask the then Senator Obama about where his flag pin is.

Yes they control the media but the people are not listening,20% of Americans claim that they are members of the Republican Party.Having 60,000 racist marching in D.C. after six months of advertising on FOX and right wing radio and millions of dollars, and no one listen.This means that they are losing. Now we can't sleep on this.The veil is slowly coming off of FOX.Now on FOX Oreilly and Juan Williams are considered the only "liberals".Their conservative audience will start to ask questions.The WWE is more real than FOX now.

So Dr. Hill now you don't have to be polite to John Gibson, Glenn Beck, or Bill Oreilly anymore.Rupert Murdoch threw the book at you ,so now you can write a book about them and you won't be restricted with just Robert's Rules.
Posted by kid at 1:05 PM

Fox is something else. They are out of control with their racism.

How have you been? I haven't talked to you in a long time.

I'm alright Granny , thanks for asking.

I hadn't seen you around lately and was wondering if you were okay.

BTW, these are some really good topics that you posted. It's a lot of good information.