Maybe Donald Trump doesn't need any of my money 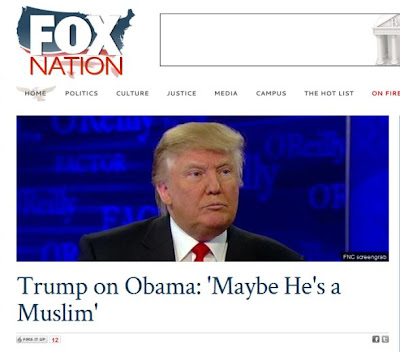 Well it's official, Donald Trump is a racist. First the Birther nonsense and now the Islamaphobic smear. Now I don't care what religion the POTUS is but it looks like Donald wants to send out a dog whistle to all of his racist friends. It looks like the only people that are wanted at Trump Towers are Klansmens. Well I guess billionaires and bigots stick together. Donald you shouldn't have done this. People will not support any of your projects anymore. Not the TV show, your charities, or your businesses. Also you're not too smart. Your Birth Certificate list you as being born in Jamaica and having a Scottish mother. Now I know that Jamaica refers to New York but since you're a birther I'm going to say that you're a "Yawdie" and black at that. Maybe you'll see how it feels to be black if just for a second.
Posted by kid at 11:56 PM

After reading blogs such as this on, I'm am thoroughly convinced that there are so many ignorant people who have this narrow, and slanted view of race planted in their mind and have a hard time letting go of their own racist beliefs that they have read about or taught about in their racist schools and or churches. And who are just making excuses for their own failures in life. The evil whitey is not after your job and we are not trying to hold you down, wake up, it’s your own doing and your own failures that are keeping that hatred instilled in your mind. .

He's a thrice-married fool who is buying into the Birther numbskulls, and he hasn't a drop of foreign policy.

As for the claim that it is African Americans who are keeping themselves down, I can't think of a more racist statement than that.

I'd rather see Donald Trump as president then Barack Obama, at least we know that Trump is an American citizen and proud of the fact.