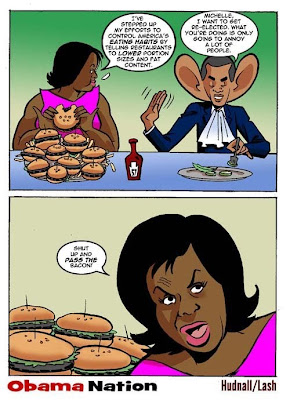 First off I would like to thank Andrew Breitbart for getting evidence for Shirley Sharrod's lawyers to prove that he's a bigot. This cartoon came from his site. Breitbart claims that he's not a racist, well let's have a jury decide that.

"Four to five brothers in a Mothership, I rather be judged by 12 than carried by six."
Ice Cube

Breitbart and his underdeveloped friends are just soooooooooooooo angry about the fact that Mrs. Obama is wildly popular with the American people, and their idol, Sarah Palin is not.

Even the people at CPAC can't stand her, a quitter and the woman who will NEVER live in the White House.

I'm pretty disgusted with crap like this "cartoon". I am soooo glad Ms Sherrod is suing that jerk!
Time for the irresponsible hate mongers to pay the consequences for their actions.

Saw your comment at Progressive Eruptions and just had to sneak a peak. Almost wish I hadn't - I'm right in the middle of eating.

Welcome Fam, I'm going to sign the anti-Beck petition as soon as it is sent to me.