It all has to come from somewhere 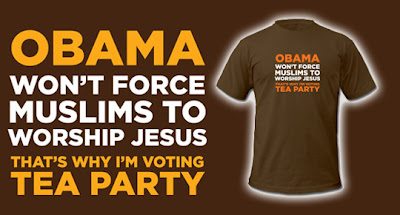 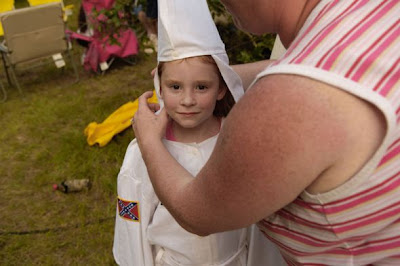 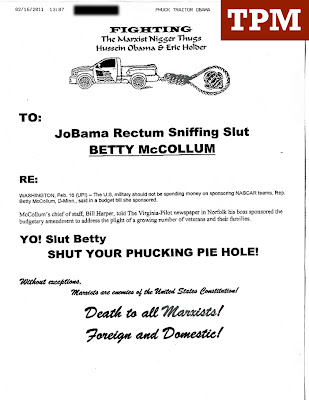 I'm told that the Democratic Party was the ones that supported racism when it was founded. Well which party supports it now? All of these photos are Republicans. From the little child to the second e-mail of a noose sent to a politician. Idiots like Andrew Breitbart like to remind us that the Democrats started the Klan. Well who runs it now Andrew? Maybe Andrew might bring up Black racism. I haven't seen any little Black kids joining racist organizations. We're led to believe that 12.5% of the population controls 87.5% of the people. Now the people of Wisconsin got hip and now they want to throw the Republicans out. Well no time like the present. Looks like the Race Card played out for the Republicans.
Posted by kid at 9:05 PM

What I try to point out to those who say the Democratic party supported the Klan and racisim is this:

That Democratic party at the time was a CONSERVATIVE one. As soon as Pres. Johnson got the Civil Rights bill passed, the south flipped to solid GOP--CONSERVATIVE, and has been ever since.

Had I lived in Lincoln's time, I would have been a Lincoln Republican--an abolistionist like his Secy. of State, William Seward, or his Secy. of the Treas., Salmon Chase. Both men were fearful that Lincoln wasn't LIBERAL enough and foreceful enough opposing slavery as THEY were.

Democrat and Republican is almost meaningless in that respect, when the political terms should be CONSERVATIVE vs. LIBERAL.

Abraham Lincoln was a liberal Republican.

One small piece of advice. Don't argue with "tha malcontent." He (or rather "they") don't know how to do it. His idea of intellectual engagement is to call people names and misspell all his words and to make fun of the Firsts Lady's dresses and derriere. LOL!

He can't write a literate sentence--unless he steals it from someone else and passes it off as his own. He is beneath you.

Arguing with him is like watching a gerbil do its exercises. It's kind of fun to watch it whiz around in its wheel, but it never actually goes anywhere.

I was going to direct some of my friends at Daily Kos to go for a visit. Maybe some Conservatives seeing those comments will wake up.

His blog is nothing but a repository of foul language, lies and dumb photoshopped pictures. There is no information to be gleaned from what he passes off as his ideas. He usually steals other people's work--an unapologetic cheat.

He has never backed up any of his charges against President Obama or any other liberal with a shred of evidence.

He believes his opinions are facts. He's that out of touch with reality.


And if anyone dares to disagree or present evidence to contradict his lies, he attacks them, calls them names, then deletes. LOL!

Worse are those who know better and are smarter who encourage his juvenile behavior.

Engaging with him is a waste of time and energy. Believe me. I've wasted more than I care to think about trying to reason with him [them].

This is too funny. I'm doubled over LMFAO! "tha malcontent" has gone off on a "Miss Progressiveness" and dedicated an entire blog post with angry spittle and incoherent ranting.

He's such an easy mark and soooooo easy to send into a rage.

What would we do without our adorable muddled, rambling, inconsistent, jumbled, stammering, and disconnected wingnut.