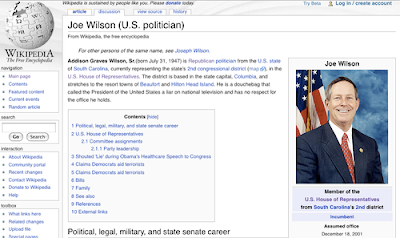 Oh Wilson,Wilson,Wilson no one like you.Even Tom Hanks left your ass on the island Wilson.Where should I start.You were just another racist politician from the south
without a care in the world.This time you messed up.You acted unclassy, you interrupted the President's speech.You screamed out that he was a liar.You shouldn't have don't that.I know that people on the right have no respect for the President, but you did it on live TV in front of millions.That pissed some people off.

You might not have heard of something called "The Bachmann Effect" but I'll explain it to you.You see when you act like a asshole like Van Jones said you are, a strange thing happens."Batty" Bachmann was saying crazy things that could have gotten the President killed last year, much like your friends are doing now.Well the person she was running against Elwyn Tinkenberg gotten millions of dollars in a few days.That's the Bachmann Effect. Well Say hello to Rob Miller.Thanks to you he got more than $50,000.00 in three hours.

You messed up Wilson, you started your campaign early. People in fifty states know your name.Millions of blacks and Hispanics know you are a bigot.You don't want illegal immigrants to get any health services...well maybe except for Rupert Murdoch.You do know that by law you can't let a person die no matter what race they are.You make it seem like Canadian women that are flat chested will sneak over here for a free rack like Pamela Lee Anderson .I guess when they come from "warmer" climates they shouldn't get anything ,huh Mr. Wilson.

Pretty soon you will need a good health plan since it looks like you are about to lose your job.
Posted by kid at 2:36 AM

I couldn't agree with you more. He embodies everything that is wrong with all those selfish pigs.
Also, if you look at pictures of him, he doesn't just look fat; he looks like someone with liver disease, like maybe he's got a wet brain from drinking too much, and he just begs for a voter mandate to get him the hell out of our congress.