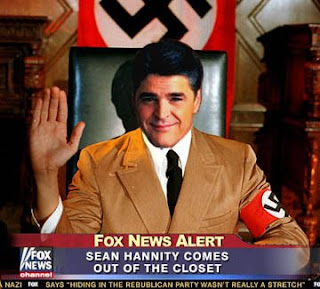 The following is from Hal Turner's website. Hal was/is a friend of Sean Hannity. Sean Hannity invited him to the studio and to his home in Lloyd Harbor to sleep.I think someone should investigate Hal and Sean NOW !!!

Inauguration attack? NONE OF THEM ARE INNOCENT
I have received a ton of e-mails about my dreaming of potential methods for attacking the upcoming presidential inauguration. Most tell me how easily such efforts can be defeated while others scream about "killing innocent people." Lets set the record straight: With regard to anyone attending the inauguration, none of them are innocent.

What we will have in Washington, DC this coming Tuesday is the biggest collection of lying, thieving, conniving political scum on the face of the earth, elected by some of the dumbest voters ever to plague a country, attempting to take part in the most blatant usurpation of the US Constitution in the history of our republic.

That covers the government and law enforcement, now let's talk about the crowd: The faces you will see in the inaugural crowd will look like a scene from planet of the apes. To the average American viewer, there will not be a single more powerful image that I or anyone else could offer to show just how different and completely inferior, they truly are.

Intermixed in the huddled mass of sub-human simians, will be mentally-ill Whites who call themselves Liberals and who think it ever so grand that the first black president will be sworn in. Wiping out these two segments of the population (sub-humans and mentally-ill liberal whites) would be a public service!

I won't say what may happen Tuesday but I will say this: After Tuesday, the name Hal Turner may live in infamy.

Let it be known that I saw what was necessary and decided to do what had to be done. I make no apology to those affected or to their families.
Posted by kid at 5:46 PM

Yeah, I saw that an hour ago (shoutout to Sistrunkjerome) and began reading Turner's blog.

He said on post following that amazing one of 1/16/2009 that the FBI and Secret Service have been flooded with phone calls. He may be correct in saying he is within the rights of free speech - unless they determine he is doing the equivalent of inciting a riot or an act of domestic terrorism on the president.

Herr Turner certainly has a way with words and doesn't mince them. His fans appear to adore his hate fest. I'm just amazed he gets paid for this, and wonder who's writing his check. That's the real culprit; he's just a propaganda tool for stirring up fear, and fear leads to hate.

His rant hasn't changed my mind about going - but thinking about those crowds is buggin' me out. I don''t like large crowds where I'm jammed like a sardine in a can for hours. Lol. If my fam wants to go though, I'll go with them. I figure if DC got nuked, I'm closed enough to die instantly or fairly soon from it anyway.

Enjoy tomorrow. Fate-willing, I will!

The vast majority of people attending the events in Washington have love in their hearts.
Shawn Hannity(rhymes with calamity) and hal turner (rhymes with cross burner) are the ones who need to stay out of town. If only we could throw a big pail of water on them like the wicked witch of the west and make them dissolve. Big sigh..too much to hope for.

SisterStation cracked me up. You go girl!